You are here: Home / Featured / Close Encounters on the Farm

Close encounters on the farm.

I haven’t written a farm post on the blog in a while, but something happened today that scared the life out of me.  It’s calving season on our farm, and we have eleven calves on the ground and are expecting thirty new calves in total. The scary thing that happened to me didn’t have anything to do with our farm animals though.  It was something I never expected.

I took time out of my work day to gain a little clarity. I do digital strategy and community management for clients from the comfort and convenience of my home office.  I carved out a bit of time to take a long walk in the bush – or as city folk like me would say, “a walk in the forest”.  The warm sun was at my back and the blue sky had not even a single white cloud.  I was listening to the sound of the birds, and smiled at the sound of the phoebe with its distinct call.  It really sounds like it’s saying, “Phoebe! Phoebe!”

I crossed the field where we planted corn last year and came to the part of the forest where the previous farmer had dumped some old vehicles.  I always got annoyed seeing abandoned vehicles on people’s properties, because it looks so unsightly. 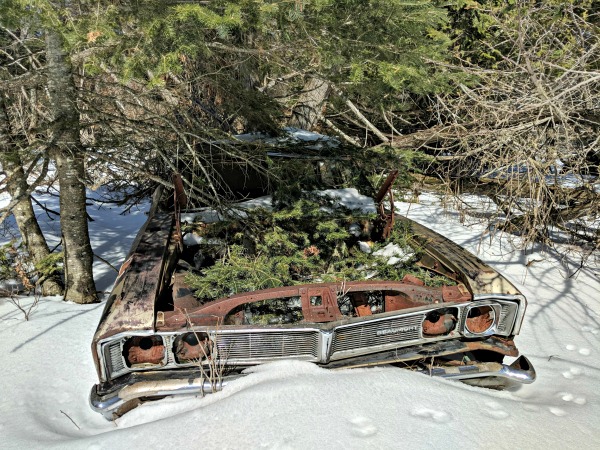 At the same time, these old cars intrigue me.  As I walked in the bush, I counted three old cars.  John says there are probably at least seven vehicles in the bush!  I go for long walks on the farm and in our bush, and have never found all of the vehicles.  I even walked for three hours and John said I had only seen one fifteenth of our property.

I stopped to take a photo of a tree growing out of one of the cars so I could show my friend, Kat.  Then something unbelievable happened.

I was being hunted

I was preoccupied with this vehicle that had a tree growing out of it, that I almost didn’t notice our dog, Cupcake fly by me.  She followed me into the forest and was really angry.  I had never heard her make that kind of sound before.  It was a mix of growling and this scary guttural sound that gave me goosebumps. Then she lunged forward so quickly and I noticed what I thought was a wolf run toward me.  It all happened so quickly that I didn’t even have time to process what was taking place.  The wolf was a mere four feet in front of me.  It was larger than Cupcake, but she went after it.

I had never been in such close contact with a wolf before.

Cupcake chased the animal away, but I had my cell phone with me and quickly called my husband.

“There’s a wolf close-by.  Come and bring your gun.”

I have always been an anti-gun person, however, living on a farm, I see the need for farmers to have a gun to protect their livestock.

John showed up soon after, with his gun and said, “It was probably a coy, not a wolf”.  By the look of its tracks, he thought it was a coy dog.  A coy dog is a cross between a coyote and a domesticated dog.  They can be more dangerous, because they are not afraid of humans.

I actually didn’t realize that John had sent Cupcake out into the bush after me to keep me company (or be my guard).  She may have saved my life.  Though coys, wolves, and other wild animals do not usually go near humans, since they are more scared of us than we are of them, in some cases, they have been known to go after humans if they are desperate.

This season has been a long Winter, but it’s not like they are starving.  There are plenty of deer and other animals and they have lots of food around at the moment.  There must have been something wrong with this coy for it to be this brazen.  It could be sick, and perhaps it got kicked out of the pack.

John returned to the house, and I stayed in the bush to continue my walk.  I was oblivious to the fact that I was being stalked.

Cupcake ran across the field growling again.  I looked up and saw John walked across the corn field.  He was yelling, “GET BACK TO THE HOUSE! YOU ARE BEING STALKED!”

What I hadn’t known was that John was in the kitchen and from our kitchen window, he saw the coy cutting off my exit point or escape route to the house.  Basically it was setting me up for a take down.  John said that as soon as the coy did that circle around me, it meant danger and it was not just for curiosity anymore.

My lesson today is to be aware of my surroundings at all times and to never go for a walk in the bush without Cupcake.  Predators are always a concern, but usually we take precautions to minimize them.  For example, we do not leave dead animals in the bush.  We bury dead animals to keep the scavengers away.  If you ever want the hair on your arms to stand up, there is nothing quite as scary as the roar of the cow herd when wolves, coys, or a bear gets too close to the herd or the new calves.  It sounds like a freight train is ripping through the land.

On the farm, there are dangers every day.  We need to exercise safety when operating or being around farm equipment, cattle, and though we usually don’t have to worry about the dangers of wildlife, we need to always be aware of our surroundings.

Life on the farm is definitely never boring.  I think my heart almost jumped into my throat today.