Cooking is love made visible.”

Some of my earliest memories consist of being in the kitchen with my grandparents, learning how to cook traditional Filipino dishes.  Afritada, Menudo, Sinigang, Tortang Talong, Adobo, Sio Pao are just some of the foods that transport me back to my childhood.  I learned a lot about life and family in my grandparents’ kitchen.  I also learned that food is very much the thing that binds families.  My grandparents often spoke about life in their homeland when we were at the dinner table.  While food provides our bodies with sustenance, it also nourishes our soul.  It keeps us in touch with our roots.  Food is also a social thing.  People get together to enjoy a good meal, company and conversation.

I suppose this is why sharing my love of cooking with my six year old daughter is so important to me.

Thankfully, Little One loves cooking and has a very adventurous palate!  In our travels, she has never balked at whatever international cuisine she has been offered.  When I took her to the Philippines when she was three years old, she ate EVERYTHING.  She even ate dishes that I didn’t even eat.  Among her favourites were Dinuguan and Tulingan.

Since teaching Little One how to cook and sharing the importance of knowing how to cook are important to me, I was excited to learn about the PC Cooking School and the cooking classes offered to kids and adults.  I visited the PC Cooking School website and perused the many classes they offer.  There were so many to choose from and all of which sounded like they would be of interest to Little One.

Little One is six years old, so she falls in to the Kitchen Kids age group (ages 6-11).  I thought a good starter would be It’s Better with Cheese class.  In this cooking class, Little One learned how to make several recipes!  The class ran from 11am to 2pm and during this time, she learned how to make Hamburger Balls (deliciously seasoned hamburger stuffed inside biscuit dough and baked), Oven-Baked Dill Pickles, Mashed Potato Balls (cheese, bacon, and mashed potato balls rolled in bread crumbs and baked) and Macaroni and Cheese Pancakes.  Every recipe called for cheese and Little One was really keen to learn how to make these new dishes.

The cooking instructor and her assistant were fabulous and highly engaging.  Little One had such a great time.  Another thing I really liked was that the instructor and assistant were all about safety in the kitchen (they were the ones to handle uncooked proteins/meats as well as use the stove and oven).  They also stressed the importance of food safety.  I was pleased to see Little One washing hands between cooking tasks after she handled food.

One of Little One’s favourite parts of the lesson was rolling out the biscuit dough into discs.  Hers weren’t uniform or the size they were supposed to be, but as the instructor reminded me, it’s not about perfection, but about the kids having fun and doing it on their own. 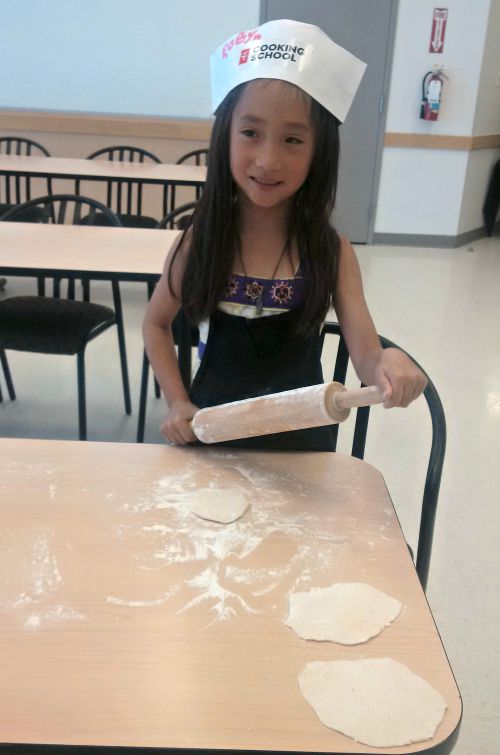 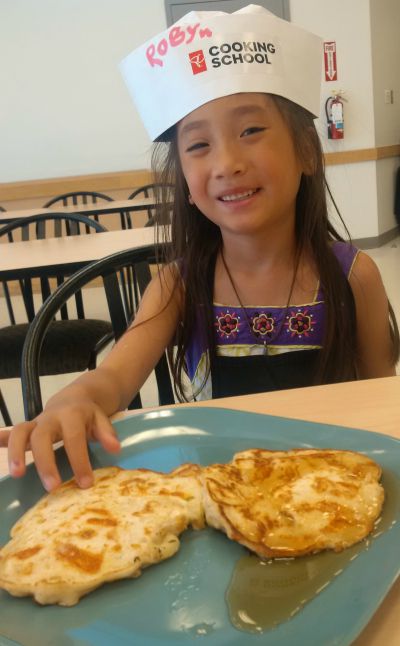 Photographs and videos of the actual cooking class and of the instructor and assistant were not permitted, but I was able to come in whenever a new cooking task was about to begin so I could snap photos of Little One in action.  Important to note that the kids’ cooking classes are for children only.  The instructor mentioned that kids tend to thrive and shine in the kitchen more when their parents are not in the cooking class with them.  She was right.  I peeked through the glass windows every now and then and saw Little One smiling, laughing and chatting with the instructor, and doing her thing!  Cooking!

What is a parent to do if the classes are from 11am-2pm?  Parents can go about doing their shopping or have some quiet time and grab a coffee.  The kids are in the capable hands of the cooking instructor and assistant, learning and having fun! 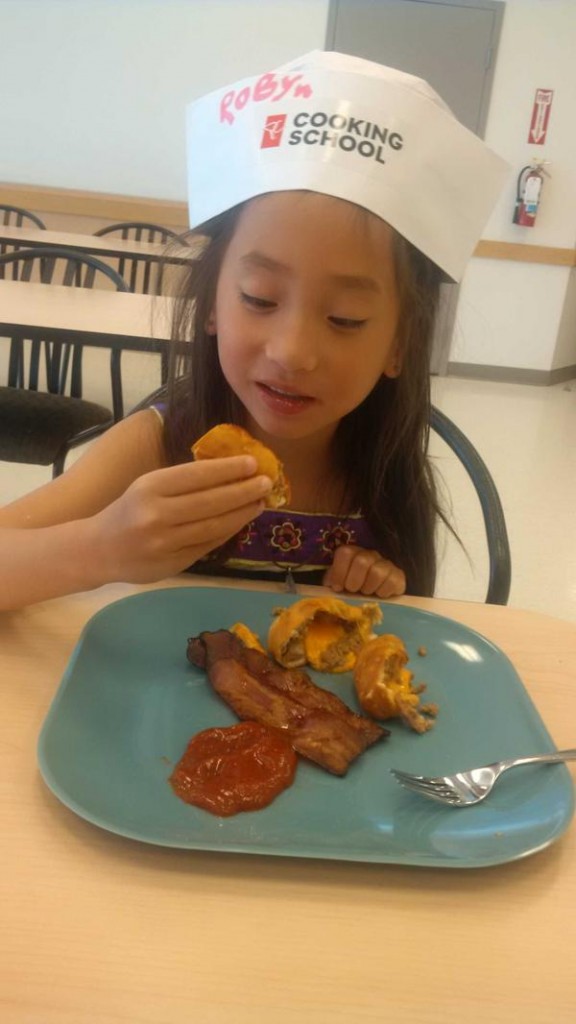 The best part about PC Cooking Classes is eating what you’ve created! 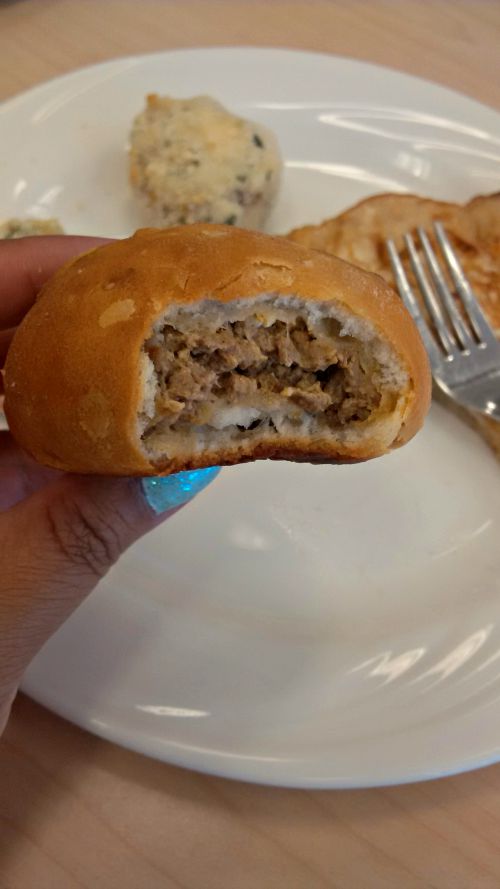 Little One’s favourite recipe was the Hamburger Balls!  I had a chance to sample all of the dishes Little One made.  The mashed potato balls were my favourite, followed closely by the hamburger balls. Little One was excited that she got to take the recipes home with her.

Another great thing about PC Cooking School’s Kitchen Kids classes is that children not only get to learn how to cook, but they also get to practice math and reading skills.  The instructor complimented Little One on her reading and math skills.  She said Little One was reading all the recipes from ingredient lists to instructions.  She also practiced fractions, addition, subtraction, multiplication when measuring, cutting, etc.  I guess we can say that chemistry was also involved, since Little One got to see what happens when certain ingredients are added to others. Liquids like milk added to solids like flour produce a semi-solid product — like pancake batter!

Little One and I picked up a few grocery items so she could prepare some of the new recipes at home.  She was so excited to make the new dishes for her friends and her Daddy!  I was pleasantly surprised that Little One picked grocery items that had the PC Stars! Little One always keeps an eye out for the PC Stars. 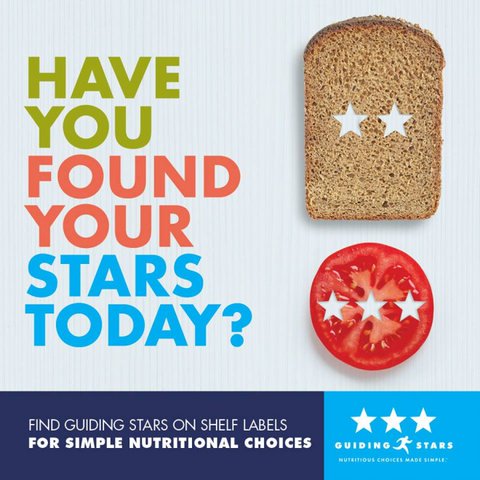 Over the past few months, we’ve been learning a lot about the Guiding Stars Program!  It was interesting to see how my six year old combined her knowledge of which ingredients she needed for the new recipes she learned and selecting which grocery items were healthier than others!

I also learned that apart from cooking classes, PC also offers Birthday Parties!  I already spoke to the cooking instructor about having Little One’s next birthday party there!  We’ll likely do the pizza party where Little One and her friends will make their own pizzas, make a fruit salad, decorate cupcakes and have fun in the kitchen.  The party includes the food, take home treat for all the kids, birthday cake, cutlery, napkins, plates, and invitations.

I know it sounds silly to be thinking about Little One’s birthday now since her birthday is in November, but apparently spots fill up quickly so booking ahead of time is a good idea.  Also, perhaps in November parents may want to get a head start on some Christmas shopping (oh yeah…I said it!) and dropping their kids off at the party for a few hours may offer some welcome downtime.  I’m not going to lie — I like the idea of having Little One’s birthday with the PC Cooking School because I won’t have to clean up any mess and my house won’t get ransacked!

With Back-To-School almost among us, it’s time to start thinking about healthy school lunches. Wouldn’t a $150 PC Gift Card be great to pick up essentials? Get your kids to look for the PC Guiding Stars when selecting their ingredients for making their lunches and healthy snacks! Eligibility: Guiding Stars Contest Giveaway is open to all residents of Canada with the exception of Quebec who have reached the age of majority in their Province of residence.

Disclosure – I am participating in the #PCStars #GuidingStarsCA program. This is a sponsored post, however, all thoughts and opinions expressed on this blog are honest and my own.