You are here: Home / Featured / Family / Prematurity Awareness Month – What it’s Really Like to Have a Preemie

Imagine what is supposed to be the most exciting time of your life turning into a time of uncertainty and constant worry…and even the scariest time of your life.  That’s what having a preemie is like.  Spending each day not knowing if your baby will survive is a reality for many parents of preemies. 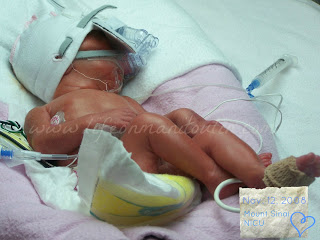 Not being able to hold her or nurse her right away was devastating.  We just wanted to make sure she was taken care of though, so understanding the limited contact was something that was a reality for us.

Feedings, bathing, diaper changing are all regulated when your baby is in the NICU.  For the most part, the babies are sleeping and are to remain left to rest (babies spend the last few weeks of life in the womb growing, but since preemies are out of the womb earlier than supposed to be, they have to do their growing outside of the womb and in their isolettes). Babies grow in their sleep, so in the NICU, our nurses reminded parents to not interrupt baby’s sleep.

In the beginning, Little One could only be handled through the windows in her isolette (incubator). In the beginning, it was limited contact still. As she grew bigger and stronger, we were able to open up the door to her isolette and change her diaper or even take her out briefly and hold her.

Feeding for Little One was through NG-tube (nasal gastric tube). Because babies born so soon have not yet mastered the “suck, swallow, breathe” process yet, they have to be fed via NG-tube. I was adamant that I would breastfeed my baby, and was encouraged by the team to pump every few hours. I pumped religiously and froze and stored my breast milk for the nurses to use for Little One. As the lactation consultant always told us, breast milk is “Liquid Gold” and so important, especially for preemies (with all the passive immunity and other things to help baby grow strong and healthy). This said, in the beginning, Little One had a combo of breast milk and a formula specially tailored for her needs. The ‘cocktail’ contained vitamins and other things that would keep her healthy and help her put on weight faster. If you think of it, there is nothing to 980 grams! That’s just a little over 2 lbs, 3 oz!

The incubator/isolette sort of acts like mama’s womb, where baby grows inside. This is why parents are encouraged to only handle baby in their wakeful hours. Babies, preemies especially, need their sleep to grow! Our primary nurse always put a blanket over the isolette during sleep time to block the light and keep things dark for Little One.

Little One also had numerous leads attached to her to measure heart rate, blood pressure, etc. All of these leads are hooked up and the stats are visible on baby’s monitor.  This is to ensure that stats are stable.  I was told by the parents whose preemie was ‘neighbours’ to Little One that we need to not focus on the monitor all the time. It can really drive a parent crazy and cause a lot of stress when  you see numbers swaying or doing crazy things.  Little One was notorious for making her numbers go out of whack (most of the time because she would remove her leads)! She was a pro at setting off alarms and whistles and making the nurses and RTs run over to her isolette!

Spending my days and evenings in the NICU became my new sense of ‘normal’. I would get up at 5am, take the bus and subway to the hospital, make sure I was there in time for ’rounds’ so I could chat with the doctors and the medical team and hear about Little One’s progress (or setbacks), go to the pumping room, pump, eat breakfast, spend the day beside Little One’s isolette, read to her, sing to her, talk to her, pump, have lunch, change her diaper, and when she got stronger, I was able to do ‘kangaroo care’ with her and just hold her! Later on I was able to nurse her. I really valued those special bonding times with her.

Leaving the NICU at night was always hard for me. Having to take the subway and bus at night and leave my baby at the hospital seemed so unjust to me. Plus, I always worried that something might happen while I was away from the NICU.  I used to call the NICU a few times a night to check in on Little One. Her primary nurses were so amazing and the nurses on duty were fabulous too. They’d give me the updates on Little One regardless of whether I was calling in at 11pm or at 2am. Yes, I actually used to call them during those hours just to have some reassurance.

It was a long 72 days and certainly not without its ups and downs. I won’t lie when I say it was the scariest time of my life.

A very big and heartfelt thanks goes out to Mount Sinai Hospital, the doctors, nurses, primary nurses, RT, NICU staff, Marianne Bracht, Tammy the lactation consultant, the Linden Fund, the Perinatal Parents, and all of our NICU family. I say family, because that is what they were to us. Thank you so much! We are forever indebted to all of you for the support you have given us.

Some things you can do to offer support to parents of preemies:

I am participating in a Preemie Awareness Blog Hop. We’re hoping to spread awareness for Prematurity Awareness Month and provide support for other parents of preemies. For more stories of life in the NICU and life with preemies, please stop by and visit these other preemie mama bloggers that have shared their story as well:

For more information on prematurity awareness, visit The March of Dimes Prematurity Campaign.