You are here: Home / Featured / Family / Visions of Sugar Plums …danced in her head while Mommy and the other NICU and Level 2 parents at the hospital had a holiday dinner of turkey with all the fixings. The wonderful people at the Linden Fund put on the dinner and gave gifts for the babies. We got to meet parents who have had babies in the NICU at Mount Sinai Hospital as well. Their stories were encouraging and seeing their little ones running all over the room and down the hospital halls, was magical. I am glad I attended the dinner. It was also nice being able to relax and chat with some of the other parents I’ve become friends with over the past five weeks. Five weeks already???

Among the ‘veteran’ parents were the parents of Isla. They wrote a book about her story. They chronicled each day of her very long stay in hospital, right down to the wonderful day when they were able to take her home! You can view Isla’s Story here. 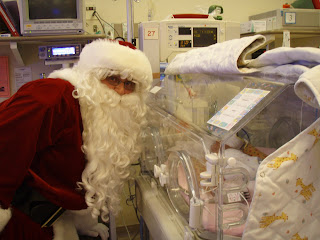 Little One had her first photo with Santa Claus. She slept through the entire thing. I considered waking her up and taking her out of her isolette, but I decided to let her snooze 🙂 Some of the presents Little One received courtesy of the Linden Fund and of one of the grandmothers of a former NICU baby. Bless that grandmother’s heart. As her donation to Mount Sinai’s NICU, she knit little preemie hats for all the babies and made little button down shirts and matching blankets for them. The Linden Fund also gave us all a tiny preemie Santa’s hat (which Little One will be wearing on Christmas!) and some cards with images to help stimulate and help with the development of vision for infants.
Contrary to popular belief, babies don’t go for the soft pastel colours that we often buy to decorate their rooms. In one of the parents’ classes I attended, the nurse told us that those yellow ducky, pink bunny, blue sheep kind of images are not as eye catching to very young babies and are more for the adults’ aesthetic value. We were informed that babies see better in black and white at first. Black and white, and geometrical shapes are easier for babies to see. Later on, as their vision develops, they are more attracted to primary colours. I learn something new every day 🙂
Hmph! I kind of like the soft, pastel bunnies and sheep! 🙂