Many of you already know that we were worried about Junior being born prematurely. On Thursday, I was experiencing a bit of cramping and a lot of mucus. I know this probably way TMI, but my panties were drenched with fluid. I didn’t think it was my water breaking, because from all the movies I’ve seen, when a woman’s water breaks, it gushes! There was no gushing.

Anyway, I mentioned my concerns to the doctor and she checked me out. Immediately from the speculum, she said I had to go to “Labour and Delivery”. There was a lot of mucus and of course, my cervix was already a bit open. She was worried that the baby might get an infection. It would be dangerous for Mom and Baby if this happened. Gah! We’re a few days short of 28 weeks! We couldn’t possibly be having the baby NOW!
Off to L&D we went. Thankfully, Hubby was with me over the weekend. I said maybe it was a blessing that he was able to make it this weekend. He almost didn’t come!
While in L&D, I had a battery of tests done (Ultrasounds, blood work, and even an amniocentesis)! I’m scared of needles and always dreaded having to get an amniocentesis. It wasn’t as bad as I thought it would be though.
The docs in L&D wanted to avoid having to induce me. They wanted to see if there was indeed an infection inside the fluid surrounding the baby. If Baby was in danger, then they’d deliver early. If not, they’d treat the infection and try to keep Baby inside for as long as they could and monitor us closely.
I was in L&D for over 24 hours. No signs of infection inside or around Junior’s ‘living area’ and Junior looks fantastic. This little guy (or girl) is really active and strong. We were hooked up to the fetal monitor all night just in case something went wrong and Junior‘s condition all of a sudden took a nosedive.
To answer your questions, we almost delivered the baby yesterday. Can you imagine???Thankfully we get to keep the little bambino inside for a bit longer.
Just to make sure there is no infection, I’ll be on IV for the next seven days. 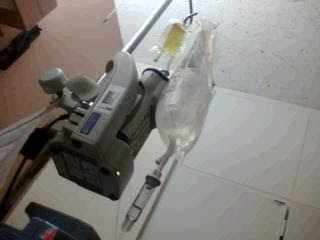 *sigh* I had one night of being hooked up on an IV and it was brutal. 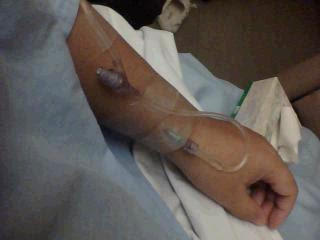 Hubby had to help me with everything! Yes, even with going to the bathroom.